I wonder what the Fort Collins City Council, or even the Larimer County Commissioners in charge of surrounding areas, will do with the challenge tossed out by city council member Gino Campana as he explores Fort Collins' path to a gold-medal-winning community. Phrases like “urban farming”, “demonstration gardens”, “community gardens” and “locally produced” accepted at a national level are words of hope. I’d like to call “ease land use regulations around urban animal husbandry” icing on the cake. However, since we are promoting somewhat-healthy lifestyles, let’s just call it “locally-produced strawberry jam over farm brie on homemade whole wheat bread with a farm cider chaser and a couple of homegrown tomatoes”. Dreaming big: Tax breaks and grants for micro-producers? What about an easy way to sell farm wines? More micro-neighborhood farmers markets? Going wild, we could even embrace the value of manure (don't laugh), the importance of rural heritage and history, resurrect the Code of the West and (you fill in the blank) ___________________________.

And the bridge came a tumblin' down

It's official. The N. Shields St. - Poudre River bridge in Fort Collins came down today. The jack-hammering took all day, but in the end the last piece of the bridge quietly caved. I wonder what the Father of Fort Collins would say. You can still get to our place from the south. 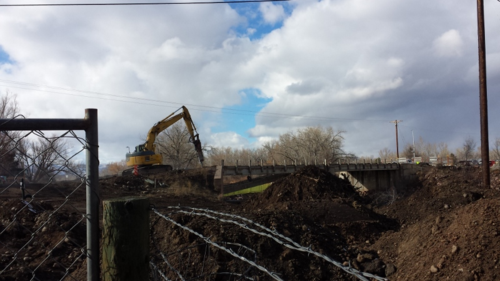 The west side of the N. Shields St. - Poudre River bridge in Fort Collins went down earlier in the day.

Hardy folk can still make it to our stable 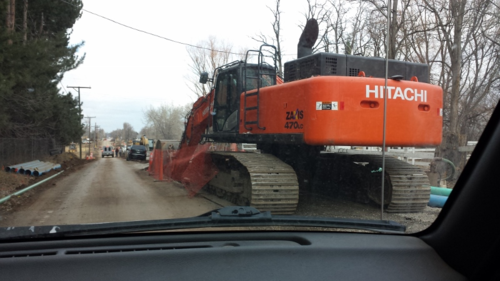 A sharp right around Big Orange here will get you into our driveway. Clients are also able to access the property from our locked entrance at the Poudre River. 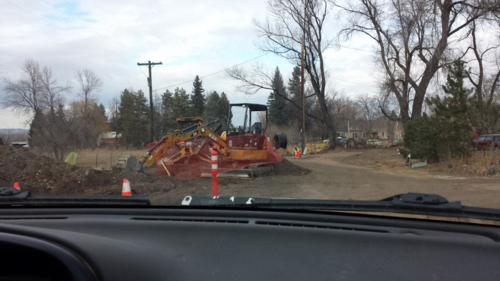 The obstacle course on the way to our stable, just after the "road closed" signs at Shields and Vine streets. 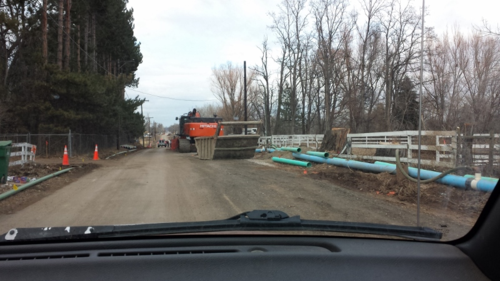 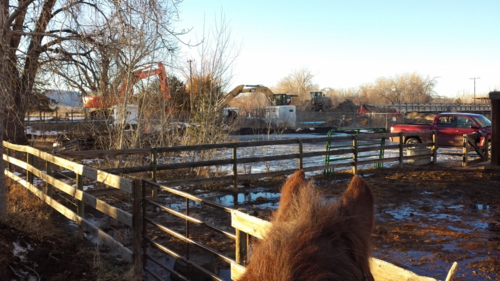 My horse watches N. Shields construction from the riverside pens at our stable.

The Poudre River Downtown Project actually extends west of downtown to Shields St. One thinks the project should make councilman and developer Gino Campana's upcoming Pateros Creek Homes, which are on the affected river along the east border of our property, even more marketable.

With Revive Properties putting up geothermal homes about a mile northeast of our historic farm, the city sewer line being sent north off our property in December 2014, the recent $2-million sale of my neighbor's property, the N. Shields St. bridge replacement and widening, and multiple landscaping upgrades of the river belt on our north border, the northwest quadrant has suddenly become a hotbed of activity.

Wonder where all of this is going? Check out the 2006 Northwest Subarea Growth Plan. I keep my fingers crossed that we won't be hurt by all the activity. If only somebody could follow the city's lead on visual pollution and get the new telephone and electrical utilities in the Shields widening put underground ... 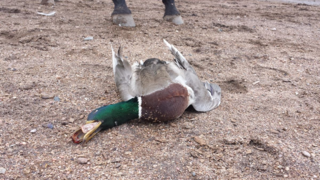 Last week, this poor little guy flew into the power lines, let out a loud "Gak!" and fell into our arena, dead. Power lines are hard on the birds, and I can only wonder how much more of this we will see when the power lines across the street are relocated to our historic farm as part of the North Shields St. widening project just outside of Fort Collins city limits. Going underground with the lines would be best, but Xcel does not want to spend the money, according to county and city workers I have asked about the problem. In other developments, rumor has it that the City of Fort Collins is sending the sewer line off of my property under the river and all the way north to Highway 287. If you believe the internet real estate sites, a property about 100 yards from my east border, 832 Wood St., just sold for $2 million. Unbelievable. I can just see all the real estate investors licking their chops.

Down through the chimney ... a what? 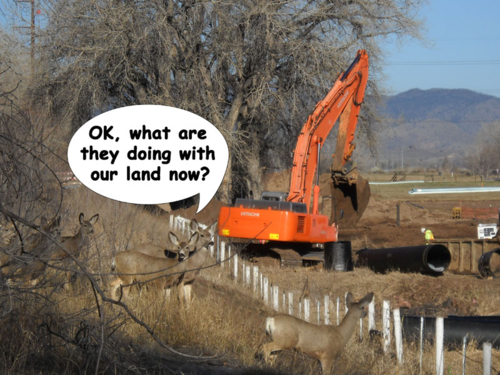 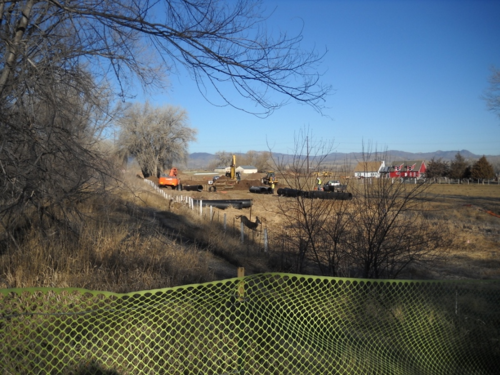 A deer jumps over the fence as the herd prepares to move along the edge of the West Vine Outfall Project, North Shields Street, Fort Collins, Colorado 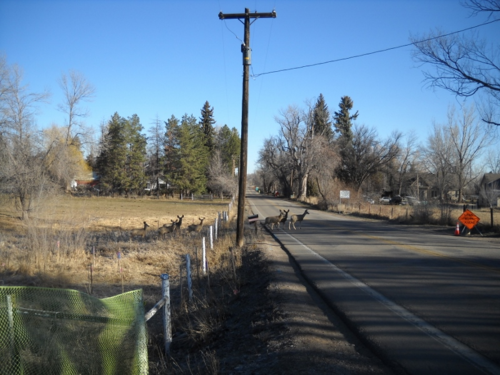 Herd of deer crosses North Shields Street, which is slated for more major changes in 2015. 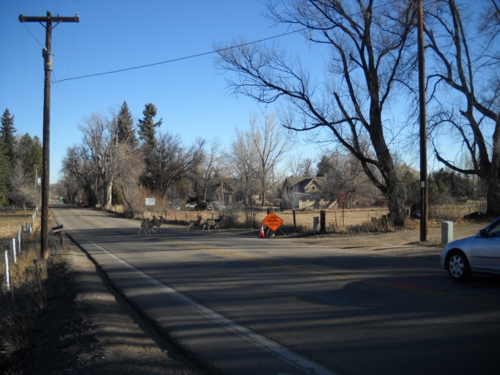 Cars slow down as the remainder of the deer herd crosses North Shields Street.

The deer are coping with construction on the West Vine Outfall Project, across the street, just southwest of our property. Starting tomorrow, North Shields Street is closed for about a week, and if you want to reach us, you need to come from the north.

Our entire neighborhood, including several historic properties, is planned for development as part of the North Shields Corridor Improvement Project starting in January 2015. 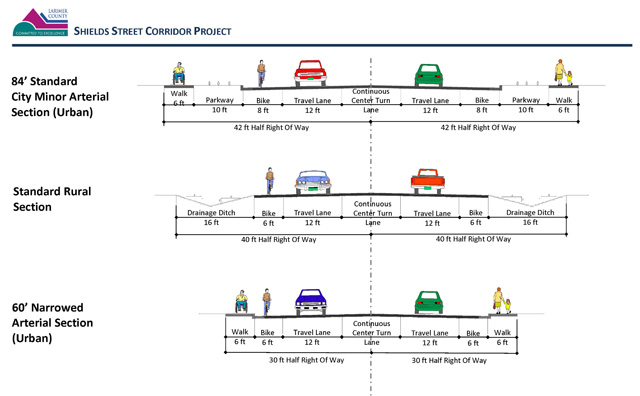 Along our border to the north, which fronts the Poudre River, big equipment has been digging for weeks to lower the river's north bank as part of the Shields Ponds and McMurry Natural Areas Project. In November, the city plans to build a sewer line to the other side of the river and stub it off. 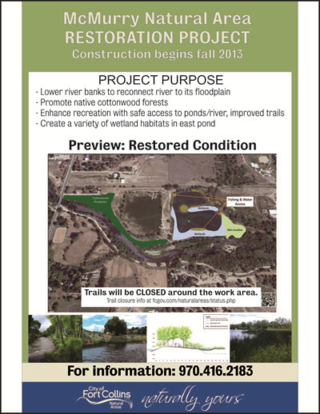 The lowering of the river bank at the McMurry Natural Areas also marks the west gateway of the Poudre River Downtown Project, a plan to develop the river corridor for recreation, and bring big money to downtown Fort Collins.

Meanwhile, more than 40 homes in the Pateros Creek Development are slated for construction on our east border.

Lost: Up to one million acres of Colorado farm land

Cost of services in new developements reveals "$1.24 in community services for every $1 of tax revenue generated, while agriculture demanded only $0.38 in services per $1 of tax revenue contributed.”
- report by Roger Coupal and Andy Seidl of Colorado State University

FORT COLLINS, Colorado -- Many of you may remember Moondrift Farm and June Baker, who for decades raised, trained and showed Morgan Horses with her husband, Robert Baker. The 45-acre Moondrift Farm property at 1108 N. Lemay Ave. was sold to genetic sex-selection company X Y LLC many years ago, and recently came back on the market. One of our local celebrities, Colorado State University athletic director Jack Graham, purchased the property for $1.1 million in October, according to the Northern Colorado Business Report. June Baker is forever remembered around here by all the adults who learned to love horses at her place as children. Hmm ... one wonders if this is a development investment. It is so sad when another local farm bites the dust. I just had coffee with a stable owner who has put their place on the market. Caught between the Great Recession, drought, hay prices, land use regulations, and property taxes, horse people are slowly being sqeezed out.

"When the cities are restricted to necessary water usage, ONLY then should agricultural water be affected ... This is an agricultural community. Let’s act like we support the agriculture that actually happens here."
-- Kathryn Warnick, Rock Soup Ranch, LLC

For the full letter, go to this North Forty News link.