Flood risk: And now, we bring you the return of the Poudre River to its natural floodplain

The Coloradoan reported on March 30, 2014 that the Poudre River and Big Thompson rivers are at twice their normal levels: Full story

"It’s not just the mountains and foothills that could be impacted. The NWS says that 'the flood risk is somewhat elevated in southwest Weld County, and also along the lower Cache La Poudre River in eastern Larimer and western Weld Counties due to flooding last September.'”
- KUNC, story on report from the National Weather Service

The Poudre River never did dry up to its usual winter trickle this year, and now the National Weather Service predicts higher flood risk due to the heavy snow pack. The City of Fort Collins is in the middle of restoring the river to its natural floodplain, along the Poudre River bike trail, which makes up our north border. I hope they get it done before all that raw dirt is swept away. 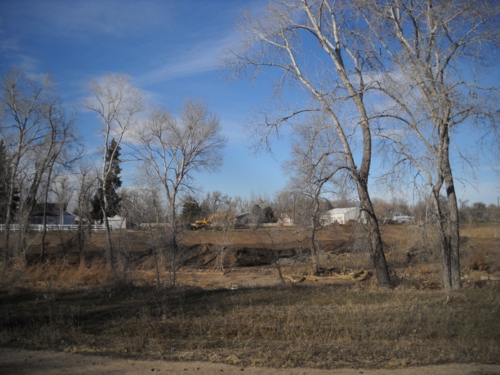 Work progresses on lowering the north bank of the Poudre River - Sunday, March 16, 2014

The lowered north river bank, while excellent for us, will be an interesting flood test for the guy in the farmhouse, background, to the left.

The Father of Fort Collins would get a chuckle out of all this river work. Thanks to him, Fort Collins moved to its current location, out of the floodway near Laporte.

See our stories and Poudre River video footage from the September 2013 flood.

Also, 'They came slowly out of the forest ...' - Bambi meets bulldozer 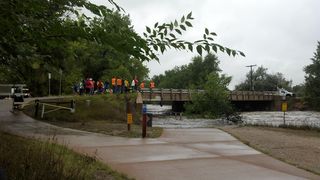 Engineers survey the N. Shields Street - Poudre River bridge, which is under attack by a swollen river.
Larimer County engineers survey the Poudre River bridge on our northwest corner as it is battered by debris, most likely washed down from the High Park Fire area. The bridge is scheduled for replacement, and its center pylon is already damaged by previous water scoring. Engineers have monitors wired to the bridge, which keep them informed as to the bridge's health. So far, so good, they say.

The river, which runs along our north border, is at about twice its spring melt levels, and has broken through to the gravel pond natural areas to the north. It has also flooded the Poudre River bike trail to our east, along the north border of the proposed Pateros Creek housing development. 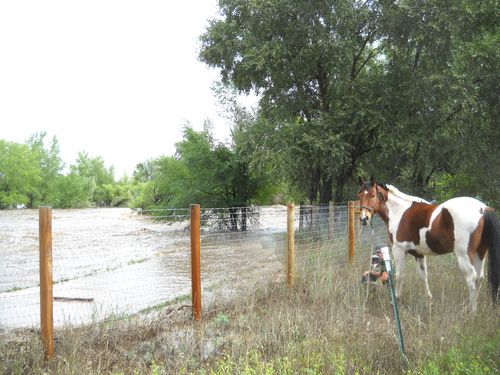 Cayla Stone and her horse, Cooper, watch the swollen Poudre River from the safety of our east pasture.

From our stable's north property line: The Poudre River has breached the bike trail underpass at N. Shields Street. Trees and other debris continue to whack away at the center pylon, but the bridge is holding. Road workers stand by, and tourists flock. All the horses are safe and happy on higher ground. In fact, from a rain standpoint, this is much better than the 1997 Spring Creek flood. What is hurting us now is the runoff from the mountains, which has nowhere to go but the river.

A new bike trail is planned at this spot. Bring your surfboards! 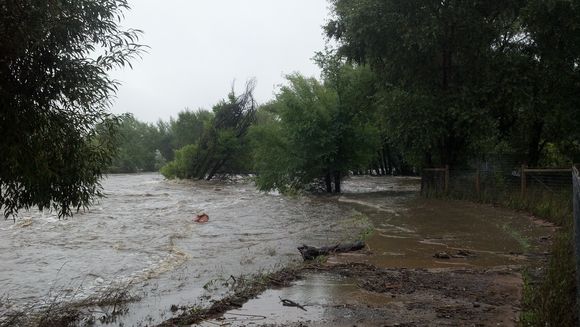 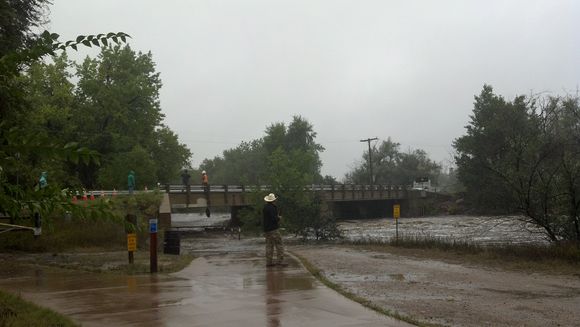 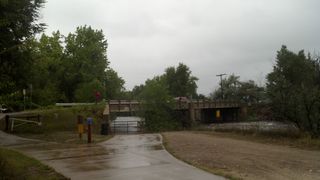 The North Shields Street - Poudre River bridge becomes a tourist attraction as people pose with small children above turbulent flood waters.
The Poudre River is lapping at its banks after heavy rain. "The Beach", a popular recreation spot, is now completely under water, and the river has breached the natural area ponds to the north. The Shields Street - Poudre River bridge on our northwest corner has become a tourist attraction, with cars stopping on the bridge for photos, and people posing with small children for that special shot. Little do they know that the bridge is slated for replacement, and is damaged by water scoring. If some of the flood debris, a big tree for instance, hit the bridge, would it hold?

... and this is the small stuff. Rangers worry about the Poudre/Shields bridge to our northwest, known to be weakened by previous water scoring, or the College Ave./Poudre train trestle if a big tree comes at just the wrong angle. 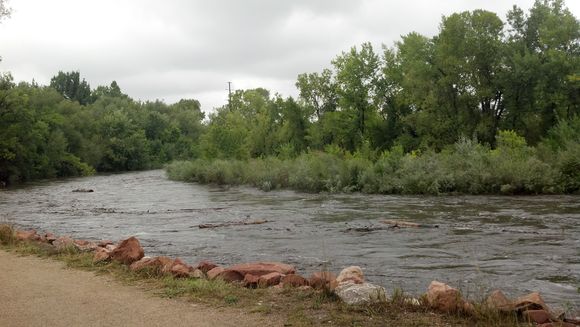 ... make previous post the northwest corner ... got a little excited. We have evacuated horses in lower areas. Rangers say river at mouth of the Poudre is running at twice spring melt levels. 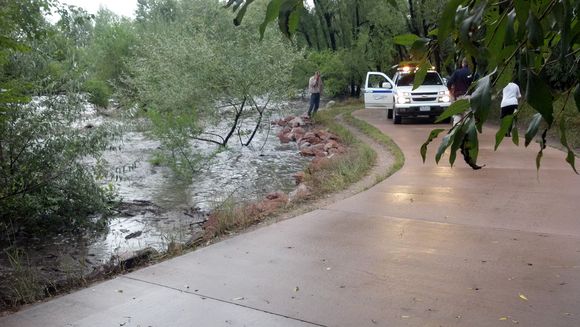