The Thoroughbred gelding had been jumping the green and white, two-foot flower jump for days. This was just another routine schooling. As the horse cantered the line, his rider balanced over the balls of her feet in a classic two-point. She shortened the reins for better contact, looked ahead, and prepared herself for liftoff. The horse pricked his ears toward the jump, boldly cantered forward, then skidded to a halt, swerved right, then left, then right and, feeling his rider come unbalanced, scrambled away from the jump. She hauled on the reins, but the gelding continued his mad scramble. The rider slammed to the ground, head first. She didn’t move. Others in the arena ran to help, but seconds later, she stood up on her own. She was shaken and covered in the mud of the puddle her body hit.

Earn free points and badges at Mane-U with these safety questions.

Except for a bad case of road rash, and later, a stiff neck, she was injury free. Somebody started laughing. Pretty soon everybody in our arena started laughing, partly in fun, partly in relief. As the rider tried to pull muddy strands of hair out of her face, she unstrapped her helmet. She stopped laughing. A six-inch spiraling crack fractured the helmet’s surface. (Click on picture to enlarge.)
Those of you who think you don’t need one, think again. My daughter’s helmet saved her life today.
Read also:
Traumatic brain injury survivor Courtney King-Dye opens helmet conference
Fractured skull: She vows to wear helmet next time
Check out this life-saving video: Every Time, Every Ride
SmartPaks video: How to properly fit a helmet

(Karin Livingston was a career 4-H leader specializing in horses, and is the author of the young-adult horse novel, Winning Bet.)

Sneak peak at horse health questions any 4-H'er can answer 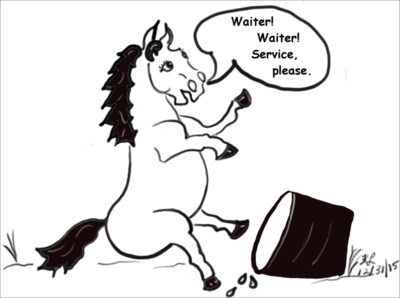 These 10 horse health questions come from the Colorado 4-H Horse Project Manual. The one about horses drinking water even beginner 4-H'ers can answer, because hey, no water equals one sick or dead horse. Answer all 10 of these with the right answer, and you earn the coveted All Star 10 badge at our sister site, Mane-U! Answer 20 horse health questions correctly, and get the Mane-U horse health badge! Share badges online with friends (and people you really want to impress).

"High school equestrians have earned their place among the most dedicated athletes," said John Long, USEF Chief Executive Officer on the organization's website. "Not only are they putting in long hours to train for and compete in the sport they love — they do so while taking the concept of teamwork to the highest level, forming a partnership with a horse to achieve their goals.

Requirements for lettering include USEF membership, 100 hours of riding and participation at two USEF competitions or five competitions at shows “affiliated with, or sanctioned by a horse show association.” Riders must complete a log documenting riding hours and competition results. Click here for complete application materials. Click here for more information on the USEF high school letter program.

And, if you haven't tried The Rider's Fitness Program, above, I use it, (and should use it more!) It compliments any riding program, does not require a gym (although having access to weight-lifting equipment makes it even better), and the exercises can be done at a variety of intensity levels.

If you are a rider trying to lose weight, check out Horse & Rider blogger Sandy Denarski's tips. 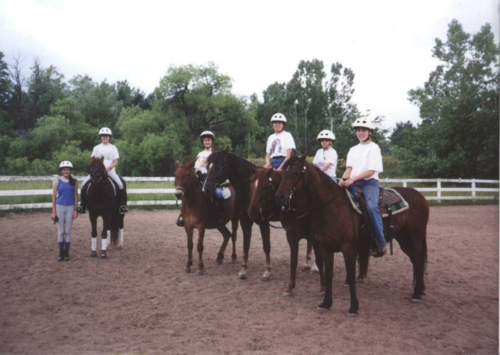 One of our old 4-H mounted meetings. Looking back, the riders in this photo all benefited from 4-H.

Wondering what to give my college-age kids for Christmas, I got to thinking about the best gifts I ever gave them.

I remembered a quote by Gary Gadsby, a longtime stable owner, who once said, “The outside of a horse is good for the inside of a kid.” I would add that combining horses with 4-H makes that horse even more effective. Turns out I'm right. 4-H participation grows better kids. Research proves it:

“Participants in 4-H programs had higher school grades, greater emotional engagement in school, and were more likely to see themselves as going to college.” (Tufts University)

“4-H participation has a significant positive effect” on reading and math test scores. (University of Florida)

Done right, 4-H focuses on positive youth development. It is a time investment, but so is all good parenting. My childrens' 4-H careers are one of the best, and most life-forming, gifts they ever received. So, if you’re still out there looking for that perfect Christmas gift for your child, consider the gift of 4-H. To find your local 4-H office, follow this link: http://www.4-h.org/ (Scroll down the page and click on the “Find Now” button.)

P.S. I would also advocate getting the horse, but there are plenty of non-horse 4-H projects as well, including in many counties, a Horseless Horse 4-H project.

(Karin Livingston was a career 4-H leader specializing in horses, and is the author of the teen horse novel, Winning Bet.)

A winning lesson plan (for free!)

Teachers and Horseless Horse 4-H leaders - check out this free lesson plan, which integrates Colorado model content standards in Science (Animal Behavior) and Language Arts. In this lesson, students collaborate to explore the predator-prey relationship, and tell how one prey-animal species, horses, uses its ears. Have fun!

You may also enjoy these free horse quizzes.

(Karin Livingston taught school for 15 years, and is a career
4-H leader specializing in the horse project. She is the author of the horse novel, Winning Bet.)

I am conducting a survey for my Honors Thesis at Colorado State University (CSU). For my thesis, I am looking at the feasibility and market potential of a website that would offer certain tools to help horse owners and caretakers feed their horses better. I would appreciate your feedback through this survey. No personal information will be collected. Feel free to forward this survey to your other “horse friends”, but please do not take the survey more than once. The survey is open until Sunday, October 17th. Thank you!

(Kalinda Livingston, a graduate of the Colorado 4-H horse project, is a student in the College of Business at Colorado State University, Fort Collins.)

JC Penney has a great Facebook promotion in which it asks people to vote for their favorite among four after-school charities the retailer sponsors. One of the four charities will win $500,000. Just go to http://bit.ly/JCPCares1, and either log in to your existing Facebook account, or create a new one. All you have to do is "like" the project, and then you'll be allowed to vote.

Practice your 4-H test skills with our free quizzes -- earn a certificate!

(Karin Livingston is a career 4-H leader specializing in horses, and the author of the young-adult horse novel, Winning Bet.)

20 questions: How well do you know leads, diagonals?

(Earn points and free badges at our sister site, Mane-U. We are mobile-friendly and love horse trivia.)

Recently, we got a judge at a horse show who gave first place in our equitation class to a rider with gross lead and diagonal errors on the pattern. Worse, it happened in yet another class. Same horse. Same rider. These things happen, and maybe the judge forgot to wear glasses. You have to figure that days like this make up for that time you won a ribbon and didn’t really ride that well. Really though, everybody riding, judging or rating needs to have a firm grasp of leads and diagonals.

Good horsemen know where the horse’s feet are, and what those feet are doing. Judges, instructors, and raters in particular need to be able to see these things from a distance. Riders need to feel the differences for balanced and safer rides, in order to pass riding advancement levels tests, and yes, be more competitive.

How good are you at leads and diagonals? We offer 20 questions for you, and if you pass, you earn a certificate that you can print out. This is not just a quiz. It is a learning experience. You can watch the videos and take the quiz as many times as you want. Good luck! Click here, or on the photo to start.

If this quiz helped you, please:

Horse Safety: How do you rate?

(Karin Livingston is a career 4-H leader specializing in horses, and the author of the young-adult horse novel, Winning Bet, available in hard copy and for e-readers.)

But no more of this "unknown" business. The secret is out: Just click here for a complete schedule of when and where to find the 4-H horses and kids at this year’s fair.

Our youth would love to have you visit, and if you are a parent, day camp, day care, or any other kind of youth organization that needs an outing, the Larimer County Fair 4-H Horse Show is perfect. Our mix of youth and animals provides an education you get nowhere else.

Want to know another little secret? The Larimer County horse clubs all compete for the “Club Image Award”, part of which is how well they treat visitors. So feel free to stop a horse 4-H’er and ask a question or two. If you like what you hear, get the club member’s name or the club’s, and turn it in to the show office behind the Ranch-Way Arena grandstands.

Directions to the fairgrounds

(Karin Livingston is a career 4-H horse leader, and author of the novel, Winning Bet, available at Amazon, Barnes & Noble online, IndieBound.org stores, on the Kindle/iPad (use the Kindle store), and to librarians and retailers through the Ingram Book Group.)

FORT COLLINS, Colorado -- Larimer county commissioners expanded privileges for boarding stables' "use by right" Tuesday night, adding to new rules the right to give up to 15 lessons per week, and host non-profit activities for which a small fee is charged.

Commissioners unanimously approved a sweeping re-write of existing horse land use rules, and then, at the behest of commissioner Tom Donnelly, proceeded to surprise everybody attending the hearing by amending the proposal, which was more than a year and a half in development.

The amendments came following public concern regarding properties that host non-profit horse activities getting dinged for "trainee visits", and being forced into some sort of review, as well as comments that "use by right" did not go far enough.

The two amendments expand possible horse activities for small as well as large horse properties as a use by right. Larger operations will still have to undergo approvals ranging from public site plan review to a full special review because of client volume.

Commissioners thanked the public -- and everybody involved in developing the new rules -- for "extraordinary" feedback that helped them make their decision.

"We've seen other counties in this area pass regulations that I think have hurt the horse industry," said commissioner Steve Johnson, "and I think it's because they haven't taken the time to listen."

"What I'm actually really excited about is that we are recognizing how important the equestrian industry is to Larimer County," said commissioner Lew Gaiter. "While we may need to go back and look at this again in a half year to a year ... we're a lot better off than we were a couple of hours ago. I think this is something we can all be very proud of."

(An ad-free version of this blog is available on the Amazon Kindle. Just search for "Hoofprints" on your device.")