Thankful for that horse trailer wreck on I-80 Triton Emperor - approximately 18 months old - with Karin Livingston - shortly after the essay contest in which she won him.

You never know where love will take you.

As the sun was setting one warm spring weekend, I drove up the on-ramp to Interstate 80, headed home to my parents from the University of California at Davis.

In tow was my first horse, an older Morgan-Quarter-cross mare, Epa, her name allegedly Native-American for “hiccup”, and my young registered Morgan, Triton Emperor, also known as “Imp” for all the knots he untied, all the gates he unlatched, and all the hammers he stole while we were working on fences. I had won Imp as an 18-month-old gelding in an annual essay contest for youth.

To tell you the truth, I was thinking about selling Imp, because lately, he had developed the annoying habit of bucking off my boyfriend.

Doubt about whether Imp could be trusted ran through my mind as I came to the end of the ramp and hit highway speed. Then something moved in my left rear-view mirror.

I looked and saw my horse trailer pass me. No kidding, it actually passed me. The trailer veered left and rolled end over end, tipped sideways, and came to rest on its side in the grass median. I veered left on to the median and slid to a stop behind it in the pickup. The trailer wheels spun, and the horses lay on their sides, trapped inside.

An off-duty sheriff’s deputy witnessed the wreck and pulled over. Together we wrenched off the mangled bubble in the nose of the trailer. Imp lay on top of Epa. I learned the value of a properly-tied safety slipknot when we pulled loose Imp’s lead. He saw daylight, scrabbled to get out, and made it. Poor Epa, she took all his hoof blows. She seemed to know though, that this was also her only way out, and as soon as Imp got loose, she too fought her way to her knees, and crawled out through the debris. 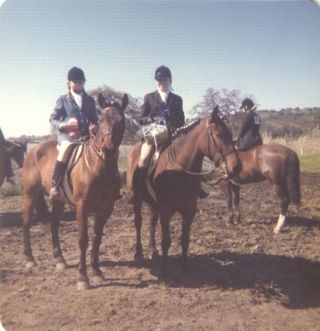 Earlier days: My sister on her horse, Orbit, left, and me on my Morgan-Quarter-cross, Epa, whose name was allegedly Native-American for "hiccup".

Both horses made it to their feet. Palm-sized swellings formed under many cuts on Epa. She quivered. Imp looked around wild-eyed, but had few cuts.

Our attending angel, the off-duty deputy, radioed for help from the volunteer sheriff’s possee, which had its own horse trailer. We had forgotten that this was a holiday weekend. No one responded.

The stable where I boarded was a couple of miles away. The deputy suggested leading the horses on foot, but I didn’t think I could hang on to their leads if something spooked them worse than they already were. I have always felt safer on horseback than on foot. Cuts, scrapes and swellings littered Epa’s back, and she could not be ridden. That left Imp, the young Morgan gelding who enjoyed bucking off certain people.

We moved along the interstate shoulder at a walk. Cars whizzed by in the dark at 60 or 70 miles per hour, headlights flashed, horns honked, and the two highway patrol escort cars’ red, white, and blue lights flashed in front of, and behind us.

Under me, Imp felt like a coiled spring. Epa moved stiffly, but I think her soreness kept Imp slow and under control. Epa always had a calming effect on Imp, and he adored his “stepmother”. Once, just to be with her, Imp jumped out of a four-and-a-half-foot pen, escaped the barn, and ran down the road to catch up to the two of us on a nearby trail.

I, the two horses, the sheriff’s deputy, and the two highway patrol cars made it safely to the boarding stable. I returned my shaken-up friends to their pens and called the U.C. Davis vet hospital emergency line. They advised me to give Epa four grams of bute right away. I remember this because four grams is a lot of phenylbutazone.

Neither of the horses sustained life-threatening injuries, or even needed stitches. I went back to my house in Davis, threw open the door, and prevailed upon my housemate and his girlfriend for a shot of Jack Daniels.

I’ve always wondered how that trailer came loose. The approach to the interstate off-ramp was very bumpy, and the only thing I can think of is that the clamshell hitch popped free. The safety chains were a joke and snapped. To this day, I prefer a gooseneck hitch. 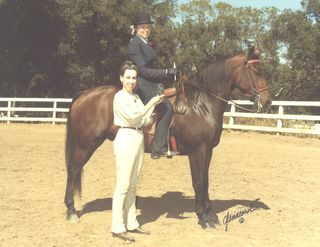 Imp, a registered Morgan, wins a high-point at a local show in California, approximately age four.

I fell in love with Imp forever that night. A handsome mahogany bay, he loved horse shows, and judges loved him. Trustworthy? He was my toddler son’s first mount, and continued to win horse show high points into his mid-20’s, mastered lots of other gate latches, and taught several children how to ride at our stable here in Colorado. Many offered to buy him.

The boyfriend? He went bye-bye.

In 2002 at age 28, although properly vaccinated, Imp came down with the West Nile Virus after a booster. Weeks and many intravenous treatments later, he recovered.

Then one night a few days later, Imp got cast in his stall. "Cast" is when a horse rolls up so close to the stall wall that it cannot straighten its legs to stand. Many horses panic in this situation. Imp must have struggled all night; he was discovered the next morning, on his side, dripping in cold sweat. We rolled him over to free his legs. I tugged on the lead line many times, and he tried so hard. We called our vet at the time, but in spite of her valiant care, he could never make it past getting to his knees. Imp had strained that brave old heart.

Our veterinarian cried with me as she put Imp to sleep.

And I am thankful for that trailer wreck. 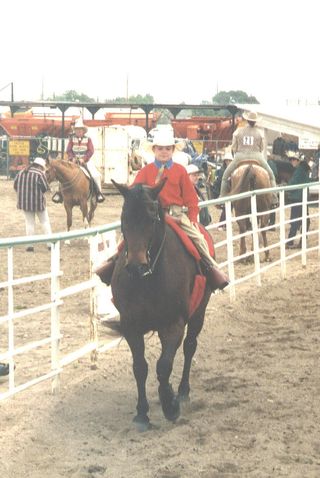 Triton Emperor, aka: Imp, squires my young son through a walk-trot class at the Greeley Saddle Club, circa 1997.

Buying a horse: Why you might pay attention to Tip #2 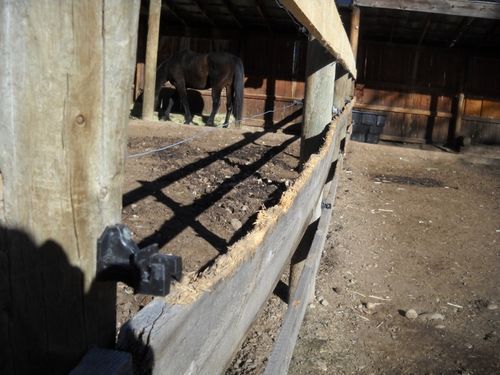 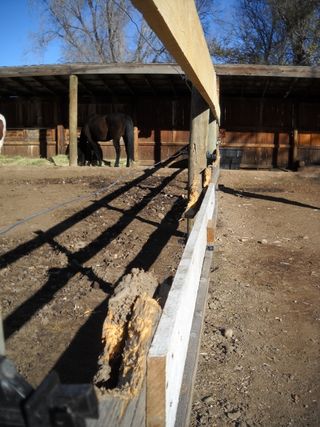 The horse in these photos DID NOT do this damage, but this ruined fence is a good reason why you might think twice before buying a horse that cribs or is a wood chewer. For other important questions to ask before buying a horse, download our printable .pdf, "Buying A Horse: 14 Questions You Should Ask".

Lost: Up to one million acres of Colorado farm land

Cost of services in new developements reveals "$1.24 in community services for every $1 of tax revenue generated, while agriculture demanded only $0.38 in services per $1 of tax revenue contributed.”
- report by Roger Coupal and Andy Seidl of Colorado State University

Horse community: Your chance to have your voice heard

The American Horse Council is asking its member organizations, their members and the entire horse community to help in the drafting of the 2015 National Animal Health Monitoring System (NAHMS) Equine Study, which is in the preparation stages now. NAHMS is within the U. S. Department of Agriculture and is working with the National Agricultural Statistics Service to prepare for its Equine 2015 study.

The horse industry's input is essential if this study is to address the priorities and questions the horse community has about itself. All organizations should pass this request on to their members so that as many horse owners, breeders and stakeholders can participate in the preparation of the 2015 study goals. This important study can go a long way in filling out information gaps in equine industry data. NAHMS is seeking Input through the end of 2013, so please act now.

The AHC stresses that the horse community has the opportunity to help determine the objectives of the study by identifying what information it would like to know about itself. Please take a few minutes now to complete a 5-minute survey at: https://www.surveymonkey.com/s/NAHMS_Equine2015_I. This will help ensure that this is the best study possible. The survey is intended to identify the specific information that members of the horse community deem valuable Surveys must be completed by December 31, 2013. NAHMS will use the survey results to draft the parameters of its 2015.

This will be NAHMS' third national study of the equine industry. It is scheduled to begin in summer 2015. The study is conducted every ten years; the last one was in 2005. Results of previous NAHMS equine studies are available at: http://nahms.aphis.usda.gov.

Any comments or questions can be addressed to Dr. Josie Traub-Dargatz at 970-494-7261 or Josie.Traub-Dargatz@ColoState.edu.

Horses heal veterans who are hurting

"I really got into some dark places after I got back and pretty much had no friends and no one around."
- Sergeant Michael Buccieri, veteran

Read the details of how a horse therapy program helped this veteran: MyNorthwest.com

Read also: To our true leaders, those who put their lives on the line for their people ...

To our true leaders, those who put their lives on the line for their people ... 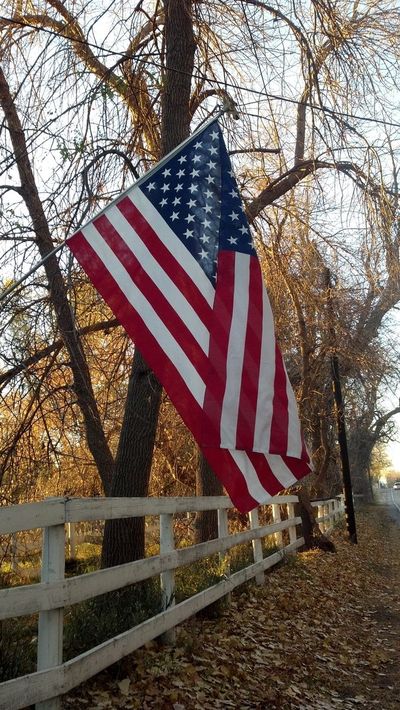 Advice from deer to horses (and humans) on GMO feed?

"Why do the deer seem to like my corn so much more than the thousands of acres of GMO stuff growing around me? For years old farmers have insisted that wildlife prefer o-p corn to hybrids, and I have repeated that in my books, but frankly I have never really believed it completely. Now that we are talking about hybrid corn that has unnatural genes stacked in it, I am changing my mind."
-- Gene Logsdon, The Contrary Farmer

It is interesting that deer turned down the GMO corn, and it would aslo be interesting to see whether horses prefer natural over GMO feed. Personally, I make it a policy never to eat berries birds won't eat, as they are often poisonous. Read Mr. Logsdon's full post, "Small Mysteries Never Solved".

Posted at 06:30 AM in Rural Living, Stable Management | Permalink | Comments (0)

Last show of the season: The jump they all hated 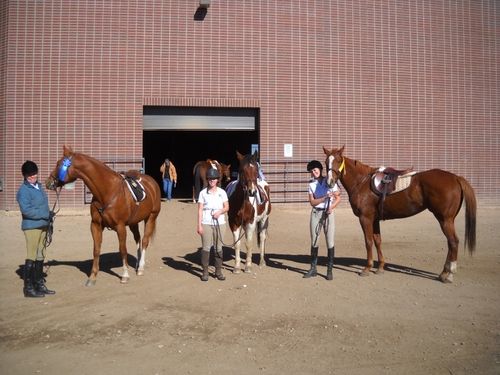 Hobbes, Cooper and Diva together placed in the top four in one of the Hunter on the Flat classes at the CSU Fall Schooling show. 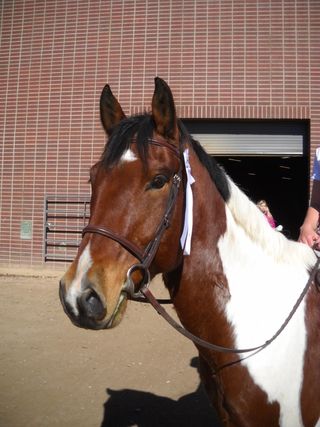 Cooper, a Paint - Warmblood cross, did a great job in his first class ever in the CSU Equine Center stadium. Cooper is for sale as a lady's or child's eventer prospect. 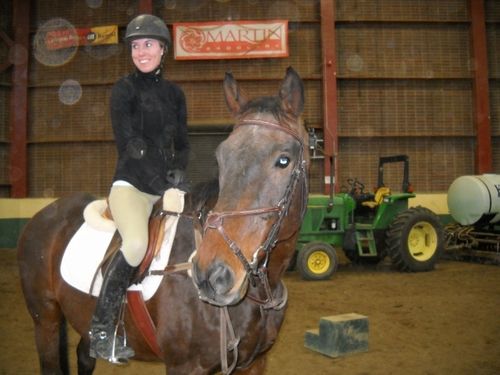 "The jump with the green box under it is evil." 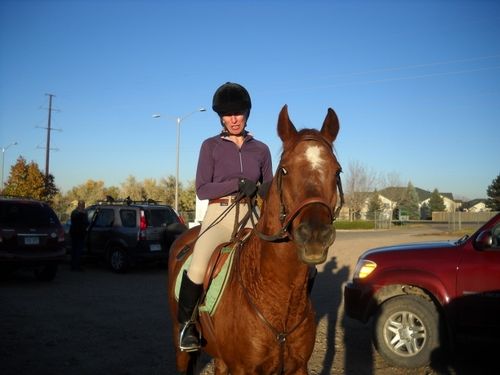 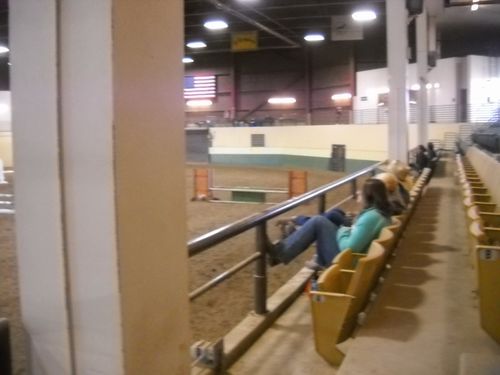 It doesn't look like much, just a box covered in green astro-turf, a couple of rails squaring off the top, and some wings, but this is the jump they all hated, and it had the most refusals of any jump at the show.