Horse owners who traveled to the NWSS and participated in events in the coliseum are urged to monitor their horses for clinical signs and contact their veterinarian immediately if their horse becomes ill or has a fever. -- TheHorse.com

This EHV virus just never seems to go away. The pharmaceutical company that conquers this bug will make big bucks.

Read also:
Biosecurity -- the Key to Keeping Your Horses Healthy (USDA pamphlet)
As the biosecurity turns: Our stable's attempts to stay healthy in earlier scare

“Do the right thing. These creatures depend on you and pride is no reason for letting an animal get in a depleted condition. There’s help if you just ask for it."

Three cheers to the Colorado Humane Society for helping horses and owners in need! Click on the denver.cbslocal.com link above for the full story.

Case cracked: Overland Stage stop, a founding father, and the mystery of the Twin Willows 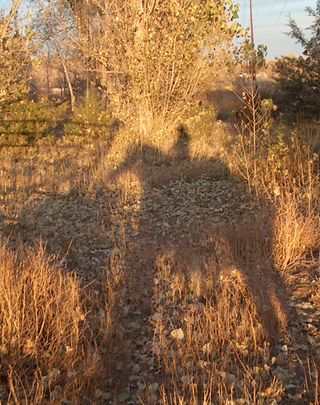 FORT COLLINS, Colorado -- This old farm resonates with untold stories. Riding along our lanes, or harvesting willow and fruit from ancient trees in the summer, I'll stumble into one of our odd pools of cold air and wonder about those who came before -- not to mention the nagging Twin Willows Tea Room mystery.

John Neutze, a former water commissioner, along with his wife Dorothy, sold us this place. The Neutzes owned a furniture store on College Avenue that burned down and they lived in Larimer County for many, many years. Dorothy told me this was once the Twin Willows Tea Room, named after two giant willows just a few steps north of the house, overlooking the Poudre River.

When we arrived in 1989, a giant stump and a giant willow stood north of the house. I asked a local historian when he visited once, and I talked to remaining family members, but I never could verify the Twin Willows Tea Room story.

Over the years, I did wonder about the tea room. This year, as a $5 million project to widen and enhance Shields Street is planned on our west border, and a proposed housing development takes shape on our east border, I wondered again about this old farm’s history. My archeologist friend, Mark Emery, took up the sleuthing torch and hit pay dirt when he unearthed the Twin Willows Tea Room brochure. 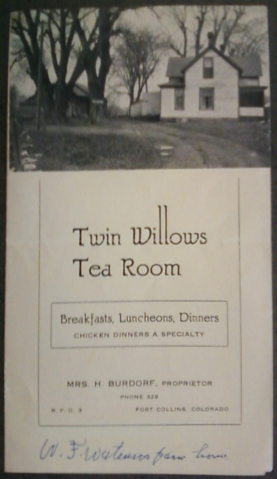 It turns out that the house we live in today, built in the late 1890's, was the actual tea room, and is still intact. The proprietors took great pride in their chicken dinners: "We raise our own chickens fed from the purest foods, and prepare them for serving. Milk and butter are produced on the ranch, cooled in spring water, served fresh and sweet." You would recognize the house in a minute from this tea room brochure photo, if you could see past the modern evergreens, below. The remaining twin willow "planted by the first president of the State Board of Agriculture" still stands. According to two separate hand-written notes, one of them at the bottom of this photo, this residence was the farm house of Wm. F. Watrous, a founding father of Fort Collins, who by the way, also used his line of credit to help start Colorado State University. In "1882 he sold the most of his town property and moved to a fruit farm situated on the river bank about one mile northwest of Fort Collins." And according to the brochure, this property was also a stop on the Overland Stage Route.

"Twin Willows – The largest tree in Larimer County (28 ½ ft. in circumference) and its smaller twin give their name to the tea room operated by Mrs. Henry Burdorf, 'Twin Willows.' These two mighty sentinels provide a majestic and magnificent setting for a 'country chicken dinner,' the dinners for which Twin Willows is famous. A beautiful spacious lawn enclosed by shrubbery and lighted by electricity furnishes an ideal place for a dinner served out-doors (sic). 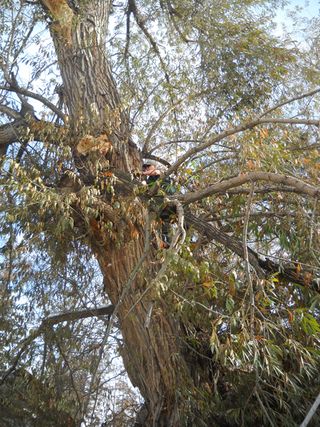 Patrons and visitors are delighted with this ranch on the banks of the Cache la Poudre River, with its wide-sweeping twin willows. It was at one time a station on the famous Overland Stage Route from Denver to Laramie. These trees were planted by the first president of the State Board of Agriculture, under whose supervision Old Main and several other college buildings were erected – Wm. F. Watrous. It was Mr. Watrous and another member of the board, John J. Ryan, who really started Colorado State College on its career of usefulness. When it was decided to open the school in the spring of 1879 it was found there was no money for that purpose. These two men went to Denver and borrowed $3,000 on their personal note. With this money the school was opened."

The upper reaches of the surviving twin willow are shown above, as Gregg climbs up to trim branches damaged in the October 2011 blizzard. This is not even the entire tree. Can you find him? This modern photo, taken Sat., Jan. 18, 2013, duplicates the approach down the driveway of the old Twin Willows Tea Room brochure, above. However, the surviving twin willow, and the equally old cottonwood behind the kitchen at the back of the house, have grown so big that they show up better in this version taken farther away.

Brother of a judge, a wedding and Shakespeare 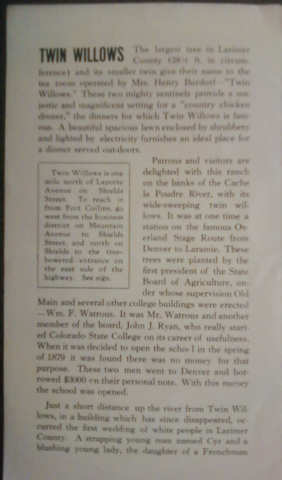 "Just a short distance up the river from Twin Willows, in a building which has since disappeared, occurred the first wedding of white people in Larimer County. A strapping young man named Cyr and a blushing young lady, the daughter of a Frenchman and an Indian squaw, were the groom and bride.

The next difficulty, after persuading the young lady, was to secure some one (sic) to perform the ceremony. Preachers were scarce. There were no justices of the peace. After two unsuccessful trips, the groom finally located a man whose brother was a judge, and he agreed to officiate. When the two arrived, however, the young lady could not be found -- she had disappeared. She was so bashful she had concealed herself under a huge fur. After she had been discovered, the ceremony proceeded. To make up for his unofficial standing, the judge's brother stretched the ceremony to nearly an hour. It was solemnized on a volume of Shakespeare in lieu of a Bible, a copy of which could not be found. Being unable to read English, however, the couple were just as well satisfied."

The Twin Willows brochure also offers two versions of how the Poudre River got its name: 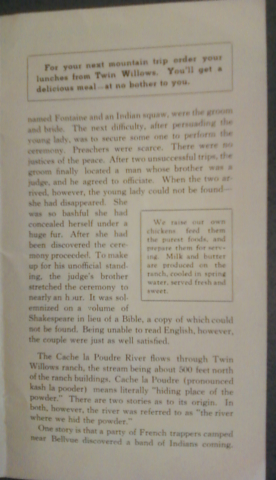 "One story is that a party of French trappers camped near Bellvue discovered a band of Indians coming. Their first concern was for their powder, and hence the exclamation "Cache la poudre!"

The other story is that in November, 1836, a party of trappers and employes (sic) in the service of the American Fur Company was taking a heavily loaded wagon train from St. Louis to Green River, Wyoming. They made camp near what is now Bellvue. During the night it began to snow, and it snowed for two days. The leader decided they could not get through the mountains with all their load. "Niege ... trop beau-coup" (too much snow), he said. An important part of the loads was 600 pounds of powder. This, with a lot of other heavy things, was "cached." A large hole was dug. The hole was lined with brush, the provisions packed away carefully, brush put on top of same, and the whole covered with two feet of dirt. The next spring a company with empty wagons returned to "the river where we hid the powder" and took the powder and provisions on to Wyoming. 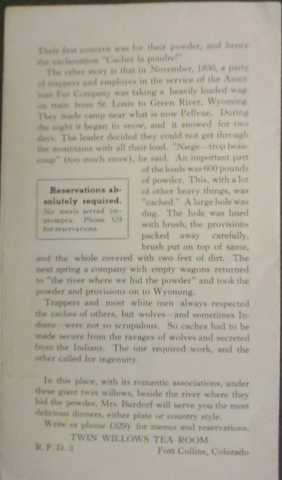 Trappers and most white men always respected the caches of others, but wolves -- and sometimes Indians -- were not so scrupulous. So caches had to be made secure from the ravages of wolves and secreted from Indians. The one required work, and the other called for ingenuity.

In this place, with its romantic associations, under these giant twin willows, beside the river where they hid the powder, Mrs. Burdorf will serve you the most delicious dinners, either plate or country style.

Write or phone (329) for menus and reservations."

The next time you find yourself going by our place, especially if you are traveling on the Poudre River bike trail just east of where North Shields St. and the Poudre River intersect, be sure to stop a moment and wonder about those who have gone before. We are the big white house and the red barn sitting up on the bluff. If you know something about 930 N. Shields St., please do comment. I suspect the Twin Willows brochure is just the tip of the iceberg.

"Grant said that from July through December, he had no control over farm finances."

While the farm brought in about $10 million, it must have had some horrendous costs other than its debt load. Click on The Coloradon link above for more on the financial details of the Grant Farms' bankruptcy filing.

When I am traveling in a carriage ...

"When I am traveling in a carriage, or walking after a good meal, or during the night when I cannot sleep; it is on such occasions that ideas flow best and most abundantly." 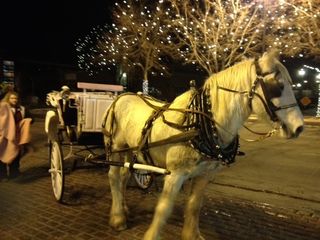 Call me corny, but this is one of the best things about Old Town, Fort Collins, especially during the holidays when lighted trees turn the downtown into a magical kingdom. Many thanks to Lois Carroll for the photo. Information on rides: http://www.coloradocarriage.com/index.php or (970) 490-1958.

“If that land goes unplanted, that’s a huge hit to the organic industry in our state.”
-- Dawn Thilmany McFadden, CSU professor and agribusiness extension economist

Click here for the full Coloradoan story on the Grant Farms land.

Grant Farms is a victim of the same forces that plague other small-parcel farmers across the nation: costs, regulations, property taxes, development pressure, and in many areas, drought. Should communities protect these local food sources, or let them die out?

You might also enjoy: Cultivating a better food system

Internet addiction: Horses to the rescue

"I care about horses and think about how I could ride them better, which has made me lose interest in computers and the Internet."
-- Kim, 14-year-old Korean Internet addict

Once again, "The outside of a horse is good for the inside of a kid" proves true. Click on the Reuters link to read the entire story about how horse riding therapy helped with this girl's addiction to the Internet.

You might also enjoy: Veterans find help through horse therapy

Palm Beach gets a whiff of the horse crowd

“This town has the strictest rules on animals in the whole country.”
-- Donald Trump

The Palm Beach and the Trumpees of this slide show are straight out of the Stepford Wives. Visit Marketwatch for the full story on how Palm Beach briefly allowed an invasion by horses and their kind.