Horses: I don't eat what I love

“I don’t eat what I treat,” said my veterinarian, who after all our years together, I just learned is a vegetarian.

Does aversion to eating horses solve the economical dilemma of horse owners who had the foreign-horse-eating market ripped out from under them by the ban? No, but by way of easing the pain, I would offer the Dec. 2012 Horse & Rider magazine article, “8 ways to keep your horse in a down economy” (and avoid having someone else eat him).

Horse & Rider was established in 1961. I have been a newstand reader since the '70s, so believe me when I tell you this is a particularly useful issue. Did you know there were 21 million horses in the United States in 1915? Thanks to slaughter, less than 1 million in the late 1950's. Today: 9.2 million.

Also, check out H&R's "Stop Like a Pro" article. It's right on target. (Click on the Horse and Rider magazine picture in the left-hand column if you need a subscription.)

Our equine relationships: Worth six minutes of your time

Fortune Cookie: Will it ruin Christmas and a chance at love?

(Fortune cookies have a strange effect on horsewoman Rosalyn Mallory, and if she doesn't get help, it could be a deadly Christmas. Part I of a festive tale that ended Christmas Day, 2011.) 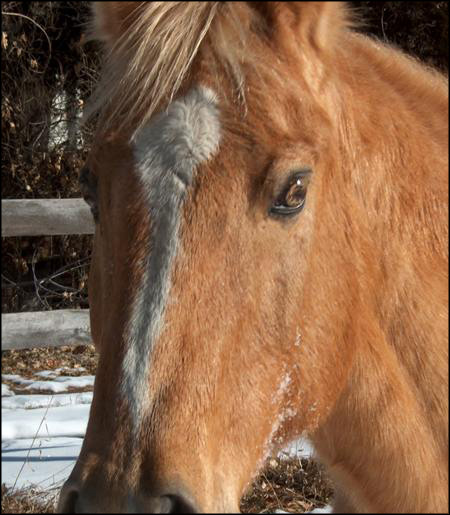 She knew fate had turned against her when she opened the cookie and read: "In love, the rats are the first to jump a sinking ship." Rosalyn had never met a fortune cookie that could be trusted.

The raven-haired stable owner pursed her lips and shook her head. For her, love was just a bag of bitter lemons. Boyfriend number five had exited stage left two days ago after he hit her new horse, Excalibur, in the face and broke his hand.

"Let us pray that while eating those lemons he doesn't choke, fall down, and break his other hand," she said to the walls. 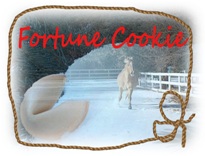 It was a slow day at the stable. Mondays were like that. The clients did, after all, have to work for a living. Most of them anyway. Perhaps just a week after Thanksgiving, they were all out Christmas shopping. For her, there would be no thoughts of Christmas until the November accounting was done.

Rosalyn’s home office overlooked a small pasture and the road beyond. At the moment, Rosalyn faced desk work, a drooling Yellow Lab named Buck, and an order of General Tsao’s Chicken, heavy on the grease. She pushed the box of food aside. Chinese takeout in Colorado could be a bit of a gamble.

Buck whined and reached out with his paw. Rosalyn pushed it aside. “Hush, I have to think,” she said.

She needed to complete the details on the intake forms for Ace, the new horse, just shipped in from Texas on the Nationwide Horse Transportation van, so she could invoice her new client. Ace’s owner planned to arrive later. Rosalyn crossed her fingers and looked up to the ceiling. For once, could we please have a low-maintenance boarder? Wait, let me guess. There is no such thing. She sighed.

Movement outside on the tree-lined road caught Rosalyn’s eye. A man with dark, slightly graying hair that hung down to his waste in dreadlocks strode along the road in ragged clothes. The hobo -- did they even have those anymore? -- gestured to everyone and nobody, she could not tell for sure.

Excalibur stood in the front pasture watching the man. When the palomino gelding heard Rosalyn’s office window open, the horse turned to look at her. It was as if the animal’s hazel eyes – unusual for a horse – stared right through her.

Rosalyn got up and opened her window just in time to hear the man shout, "The time will come! The time will come!" She chewed her lower lip. This man had been a fixture in the neighborhood for several years. His home remained a mystery, probably a sleeping bag in a cardboard box somewhere along the nearby river.

The man passed directly in front of her pasture. Excalibur snorted and trotted away. Rosalyn shivered and closed the window. So far, the golden horse, rescued from the auction yard, refused to do anything but panic near humans.

Rosalyn sighed again, massaged her temples, and ran her fingers through her mane of hair. She grabbed another fortune cookie, broke it open, and read: "Business and health matters will improve."

(Next: The crunch of metal on stone)

A pick among hoof picks 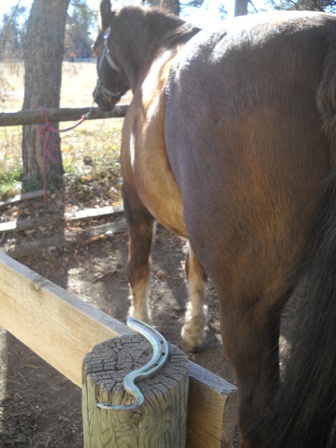 In all the years I've had horses, I've run into a lot of hoof pick designs. This design by Epona has worked out really well for me, and I like that it looks like it came from a horse shoe. I bought this pick at Jax Farm and Ranch in Fort Collins, Colorado.

Kids 15 & under could be banned from 4-H horse, livestock projects

FORT COLLINS, Colorado - New federal labor rules could bar those under 15 from raising animals as part of a 4-H project or learning the newest techniques in animal husbandry, according to Cattlemen's Association vice president Terry Fankhauser, who was interviewed in The Coloradoan newspaper.

The proposal by the U.S. Department of Labor could also kill jobs for teens working on farms and ranches. Action on the plan has been delayed until Dec. 1 so the department can get more input, according to the Coloradoan.

Rather than babysit to help pay for my horse, I had my own stall cleaning concession at age 12, with no ill effects. Today, my 12-hyear-old self could not work at my stable, and if planned Department of Labor regulations are approved, youth under age 16, and in some cases, under age 18 will be barred from many kinds of ranch and farm work.

Instead of anti-business blockades, let’s be proactive. Keep the 4-H tractor certificate as a qualification for young workers. Add the certification 4-H already has in place for horse care, handling, and riding as a prerequisite for work with horses. 4-H is a proven education program that gives youth the agricultural and equine safety skills they need.

Quit saying “no” to our young people. Instead say, “Yes, here is your chance to develop the entrepreneurial skills that can spur this country forward.” Today is the deadline for commenting on the DOL's proposal.