FORT COLLINS, Colorado -- Existing stables could have special incentives to come into compliance with new rules on the table in Larimer County, including:

"I think every business currently in operation right now should be grandfathered in, no questions," said county comissioner Tom Donnelly.
Planning commissioner Roger Morgan argued that all stables should be held to typical business standards, regardless of whether they pre-existed.
"Once you take a property and you go into a business, then you have to ascribe to a higher level," said Morgan.
It remained unclear what would happen to existing stables that fall into so-called growth-management-areas (GMA's). These are typically properties on city/county boundaries which, based on an earlier agreement between the county and cities, fall into a mutual "watch list" for tougher rules.
Historically, Larimer County turned a blind eye toward horse stables. Based on about 25 complaints, primarily against non-business horse property owners over three years, the county 18 months ago launched the Horse Facilities Study, aimed at regulating equine operations.

Whoa: What stable has paved parking?

Whoa: What stable has paved parking?

FORT COLLINS, Colorado -- County commissioners interrupted the joint working session on new rules for horse stables Wednesday night, and challenged the direction proposed rules are taking.
"I have never been to a horse boarding stable that has a paved parking area," said Larimer County commissioner Steve Johnson. "This is part of the problem. This is why no one is complying with the code."
"Ninety-nine out of 100 horse boarding stables in the county, nobody is complaining about," said commissioner Tom Donnelly. "It seems like this meeting is completely off track what we were talking about. I don’t even want to continue."
"Some of what we’re looking at here is much, much bigger than just horse business," said commssioner Lew Gaiter. "Let’s get the code right … We’re in the 21st century now, it's time to do some things differently."
Wednesday marked the last joint working session for the working group, planning commissioners (they have a preliminary advisory vote), county commissioners (they have the final vote), and county staff before the proposed new land use rules go to the public for feedback April 6.
Staff have proposed rolling horse stables into tough standards designed for general business, a stance many of the working group members oppose.
"Horses have agricultural uses," said working group member Trisha Swift. "You can’t just say, oh, it has to be just like a home occupation."
"I don’t understand the controversy being that difficult," said county commissioner Roger Morgan. "You need to have an access that is safe. The public is entitled to at least park their car somewhere where they don’t step into two inches of mud."
Existing stables: Evolution or extinction?

My advice? Send the 'few' somewhere else

A friend of mine asked me the other day whether she should keep the one horse boarding on her three acres and add two more who are interested.

This was the second time in a month someone with a “few” rural acres asked me about boarding a “few” horses to make a “few” dollars without having to do anything because the “few” will do everything themselves.

My thoughts? Run, don’t walk, away from the whole situation as fast as you can.

My advice: Save yourself some angst, and send the “few” somewhere else.

Bad barn habits: Other horses you may not want to accept

Things a horse shouldn't be able to do

Is this horse for real? This YouTube video has been around for a while, but I guess I missed it. "Patches" is one smart, amazing, well-trained equine.

I couldn’t believe it yesterday when one of our clients caught a jogger shaking the wire bike trail fence, built by the city, not me, and watching the buzzing sound scare the horses. The horses milled around and refused to be caught, I guess, because they thought their hot wire was after them. It amazes me humanity survived at all. It also amazes me that the county feels the need to protect the public from horse operations, not the other way around. Another client once caught a passerby standing on one of our fence posts, spying on our property. The worst happened five years ago when a public dog invaded our property and mauled my goat, Lawrence. (Read “A Weekend of Horror” at our stable website.) Tax dollars would be better spent regulating this kind of public behavior, not property owners’ land use.

You have got to love Colorado. Four days into spring, and we get snow that shuts down the town. It’s not exactly great riding weather. Still, there are things you can do to keep your horse sharp when the weather, or an injury, prevents a normal ride.
My favorite conditioner and therapy is the walk-out, which you can do in almost any footing. Faster gaits create impact and sudden torque that can damage or wear down fragile tissue. The walk, on the other hand, is safe, and if you really ask your horse to extend that walk, it provides strengthening, toning and endurance benefits. (4-H trivia: Is the walk a 1- 2- 3- or 4-beat gait? Answer below.)*
Note that our quarter-mile track of compost melts snow quickly and is much firmer than the normal clay-based muck that develops after heavy rain or snow in this area. Another reason to manage your lovely manure!
Anyway, one horse in this photo has an old knee injury, and needs constant gentle exercise to keep the scar tissue flexible. The other horse is coming off of a double whammy of broken cartilage and a tendon injury.
These two love their walks, and after three days to a week of a mile or two walking on the flat, both are noticeably sounder, and can move up to work at the jog and lope. Trust me. The walk is some of the best medicine out there.
* 4-H answer: The walk is a 4-beat gait. This is important because good riders always know where their horse's feet are.

This grandfather "rides" his talk

While some of us sit around spouting off about the way we wish the world could be, here is one man who "rides" his talk. This grandfather, featured at http://www.siouxcityjournal.com, has a grandson with special needs, and is riding more than 200 miles on horseback to raise money for Easter Seals.

The working group in charge of solving the horse facility problem also struck lesson horses from the list of items that "cost" a property owner, leaving property size, stable visits, and number of horses to determine a stable's review level.

Of course, there are still meetings down the road, and none of this is cast in stone. County planning staff and one planning commissioner, Roger Morgan, participated in Monday night's meeting, along with working group members.

Morgan said enforceability is an issue he and other commissioners have seen repeatedly.

"How do you protect the existing neighborhood, and at the same time allow people to use their property to make some money?" said Morgan. "How do you enforce it?

"Enforcement is not a science," said county planner Russ Legg. "It’s an art. What you’re really looking for is somebody that’s really an egregious user of the system. We’re gonna be there when you let your manure pile get too big or the smell’s too bad."

Some working group members lobbied for special expansion consideration for the few stables that went through the expensive special review process. Morgan questioned whether any "special interest" groups should get exceptions to standard approval processes because exceptions cost the taxpayers money.

A public meeting is scheduled for April 6 in the Larimer County Courthouse hearing room, and a joint work session of commissioners, staff and working group members is planned for March 31.

Check out how you would fall into the latest formula (MSExcel 2003): Horse Property Land Use Calcs 03_22_10 My Hoofprints.xlsx (10.6K)
Minutes from this meeting and details of the latest proposal

A double take on killer food 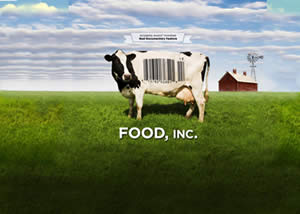 Oh, my gosh – call me nearly a year behind the times, but I just got the movie, Food, Inc. off of my Netflix list, and I may never want to eat again unless I grew it, raised it, or bought it at the farmer’s market. For a “taste”, go to Food, Inc.’s site and watch their trailer. (Click on the picture.)
Loving horses the way I do, it always seemed cruel to have livestock on the place that I actually knew, and actually had to eat.  Now I’m thinking a temporary life at my place would be heaven for a “consumable”, at least compared to what usually happens to most of them. Plus, I wouldn’t keep them in raw sewage five feet deep.
The things we never knew … maybe I should switch from boarding horses to small acreage farming and save my life on several counts.

(Have you read my young-adult horse fiction novel, Winning Bet? Click on the cover shot, left, or explore "Books About Horses" on this blog!)

FORT COLLINS, Colorado -- In the last go-round, it looked like farmsteads, value-added agriculture and home businesses might be added to proposed rules for horse boarding stables in Larimer County. In many cases, the rules could force businesses to undergo costly reviews, close their doors, or continue illegally.

Whatever comes of the process underway now will change rural property land use forever. Early information via county websites and e-mail has been as rare as the proverbial hen's tooth.

Another meeting to hash out review standards and a "transition" program for existing stables is planned for Monday, March 22, 6 p.m., in the Larimer County Courthouse Offices Building, Carter and Boyd Lake Conference Rooms, 200 West Oak Street. The public may attend, but is not usually allowed to comment.

Stay tuned as we follow this important issue. (Previous coverage)

If you would like to get involved, other important meeting dates at which the public will be allowed to actively participate include:

May 2010 - Board of County Commissioners Hearing and decision on revised recommended code amendments (specific date yet to be determined).