Blue Christmas: 'Drops of blood along the mare’s route'

December 25, 2008 -- It a took a few attempts by the caller at our back door to make me understand that Blue, our resident Paint mare with a left blue eye, was probably at this minute dripping blood on the public bike trail -- at a dead run.

In 19 years, no horse has ever escaped our stable, let alone go through three fences to do it.

... running for the bike trail

My parents, my children and our guest dropped the last preparations of Christmas dinner, grabbed our jackets, and ran for the bike trail.

The client who brought the news to the back door ran ahead of us. I stopped at Turnout #1 and haltered my gelding Dell in case we needed equine support. People who saw me at our trail gate pointed and said, “The horse went that way!”

I knotted the lead line to make emergency reins and one man stopped long enough to boost me up on to my gelding’s 16.2-hand back. I shouted thanks and kicked. In real life, high-speed, heroic rescue attempts often go awry. I am living proof. Dell refused to go faster than a trot. I could not figure out what was wrong, but didn’t have time to argue. A trot would have to do.
We trotted past a clump of white horse hair on the bike trail fence and I knew Blue was cut.

A quarter of a mile later, the bike trail forked two ways: One route ran directly next to the river, the other along the cement bike path. No one was in sight to help us. We took the right fork.

It was a good choice. My gelding and I caught up with my daughter attempting to run in fleece-lined clogs. We would have passed her, but Dell stopped dead when he saw the killer, abstractly-decorated evergreen tree looming ahead of us. Apparently creatively decorating this tree is an annual community Christmas tradition on the bike trail.

Again, so much for a heroic run-to-the-rescue: the decorations glittered and shifted in the breeze, a threat to any sane horse. (Note to self: Set up a weird-looking Christmas tree as a trail obstacle for future schoolings.) I kicked and kicked. Dell froze to the spot.

Finally, my daughter ran past my gelding and he followed her.

... past the tennis courts

Once past the killer Christmas tree, Dell agreed to trot again, and we zipped along, passing more people who now pointed and said the runaway horse went behind the park at Martinez Farm, about half a mile away. As we trotted on to the open fields just before the park, we could see Blue in the distance, past the tennis courts.

Several police cars clustered in the parking lot closest to her, and an animal control van crept up the bike trail.

My gelding saw Blue and, thank goodness, nickered. The mare stopped. We walked slowly toward Blue, which worked well until I made the mistake of lifting my head and looking at her. (Any horse whisperer will tell you never look a wild horse in the eye. It confirms you are a predator.)

Blue rolled her eyes and skittered away, coiled as if to run. It looked like she might take off farther east, which would put her on the main north-south thoroughfare, College Avenue, in about 10 seconds.

My good friend Dell-the-horse nickered and the mare stopped again.

... pocket halter to the rescue

Conversation seemed like a good idea, so I talked to the mare about how her stable mates missed her and needed her back. Avoiding any sudden movements, I slipped the pocket halter line around her neck. I finished turning the pocket halter into a complete halter and breathed a sigh of relief. We had her.I dismounted and felt for the end of my pocket halter, ready to put it around Blue’s neck at the first chance. I studiously kept my eyes down, and untied the side of the lead line on Dell’s halter that had completed my emergency set of reins. Leading Dell, I sidestepped toward Blue. She looked at me out of the side of her eyes, and snorted, but held her ground.

Our client, the man who first saw the whole thing, was lurking nearby in case he needed to cut Blue off from College Avenue. How he got ahead of Blue, I will never know. This man must have run a mile in about 30 seconds. Anyway, moments later, we had a regular halter on Blue. Sandwiched between our geldings, Blue let herself be led back down the trail toward home ground.

The closer we got to our stable, the worse Blue limped, severely favoring her left hind. She dripped sweat, and several cuts bled.

Once safely in her overnight pen, Blue began holding the injured left hind leg off the ground. I called her owner, out of town for the holiday, and she asked me to call a veterinarian. I telephoned our friends at Equine Medical Services, and about 15 minutes later, Dr. Jay Altman arrived.

Checking Blue with his stethoscope, Dr. Altman put Blue’s heart rate at 80 beats per minute. (Normal is in the neighborhood of 35.) Blue’s gums responded slowly to the capillary refill time (CRT) test, and her gut sounded too quiet. Dr. Altman gave her painkillers and a sedative to help her cope with shock and tubed her with oil and water.

A complete examination later, we couldn’t believe it: None of Blue’s cuts proved serious. “I had another client horse that did something like this,” said Dr. Altman, “and it took several surgeries before it recovered. This is amazing.”

Dr. Altman trimmed the hair and cleaned around Blue’s wounds as dusk turned into the early darkness of winter. By the time he finished, Blue’s heart rate had slowed to 34 beats per minute, and she put weight on the left hind. Granted, Blue was feeling the effects of some nice pharmaceuticals, but had any injury been life threatening, the drugs would not have been able to hide that fact. Dr. Altman guessed that Blue just hit her leg on something or suffered a strain, and that whatever the injury was, it was not severe.

... our worry was the stress

Our only worry was that the stress of catapulting through three fences and running nearly a mile in a panic might still cause Blue to colic. Dr. Altman recommended hourly checks for the next four hours as well as withholding food due to the drugs Blue received.

We do night stables daily, and I checked Blue one extra time before going to bed late Christmas night. She seemed downright cheerful. I wanted her to look guilt-ridden.

The next day, Blue was able to walk on the left hind, and while sore, the mare seemed otherwise fine.

We gave Blue a gram of bute. We also discovered that she reacted violently to cleaning her wounds with dilute Betadine and gauze, and switched to a spray bottle of dilute Betadine, which worked well. It seemed strange to us that spreading antibiotic ointment on the cuts did not bother Blue at all. Go figure.

A day and a half after the incident, Blue seemed perky and nearly sound, so we turned her back out with her pen mates. The lead mare of the pen greeted her with a nip, and life returned to normal.

Walking the trail later, I realized why my (now highly-intelligent) gelding Dell would not go out of a trot. Slippery ice lay under the crystalline snow. I could barely walk without slipping. 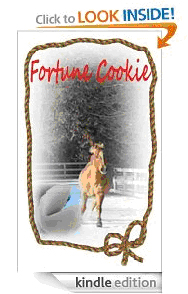 Had we incorrectly guessed where Blue went, we could have tracked her. I found drops of blood along the mare’s route, a grim reminder of worse things that could have happened.

We had three heroes on site that stepped up to the plate and rebuilt the three fence blowouts before darkness descended Christmas night. You know who you are, and I thank you. I might still be out there hitting my thumb with the hammer.

Blue’s blanket was not so lucky: A police officer returned the back half to me, and we removed the front half when we caught her. (Click on the Adobe Flash Player slide show to see it.) Somewhere along the way, the blanket separated cleanly, and suffered fatal inner lining injuries.

No matter. Blue is one horse that will likely never wear a blanket again.

Blue Christmas: 'Drops of blood along the mare’s route'
Also by Karin Livingston

December 25, 2008 -- It a took a few attempts by the caller at our back door to make me understand that Blue, our resident Paint mare with a left blue eye, was probably at this minute dripping blood on the public bike trail -- at a dead run.

In 19 years, no horse has ever escaped our stable, let alone go through three fences to do it.

... running for the bike trail

My parents, my children and our guest dropped the last preparations of Christmas dinner, grabbed our jackets, and ran for the bike trail.

The client who brought the news to the back door ran ahead of us. I stopped at Turnout #1 and haltered my gelding Dell in case we needed equine support. People who saw me at our trail gate pointed and said, “The horse went that way!”